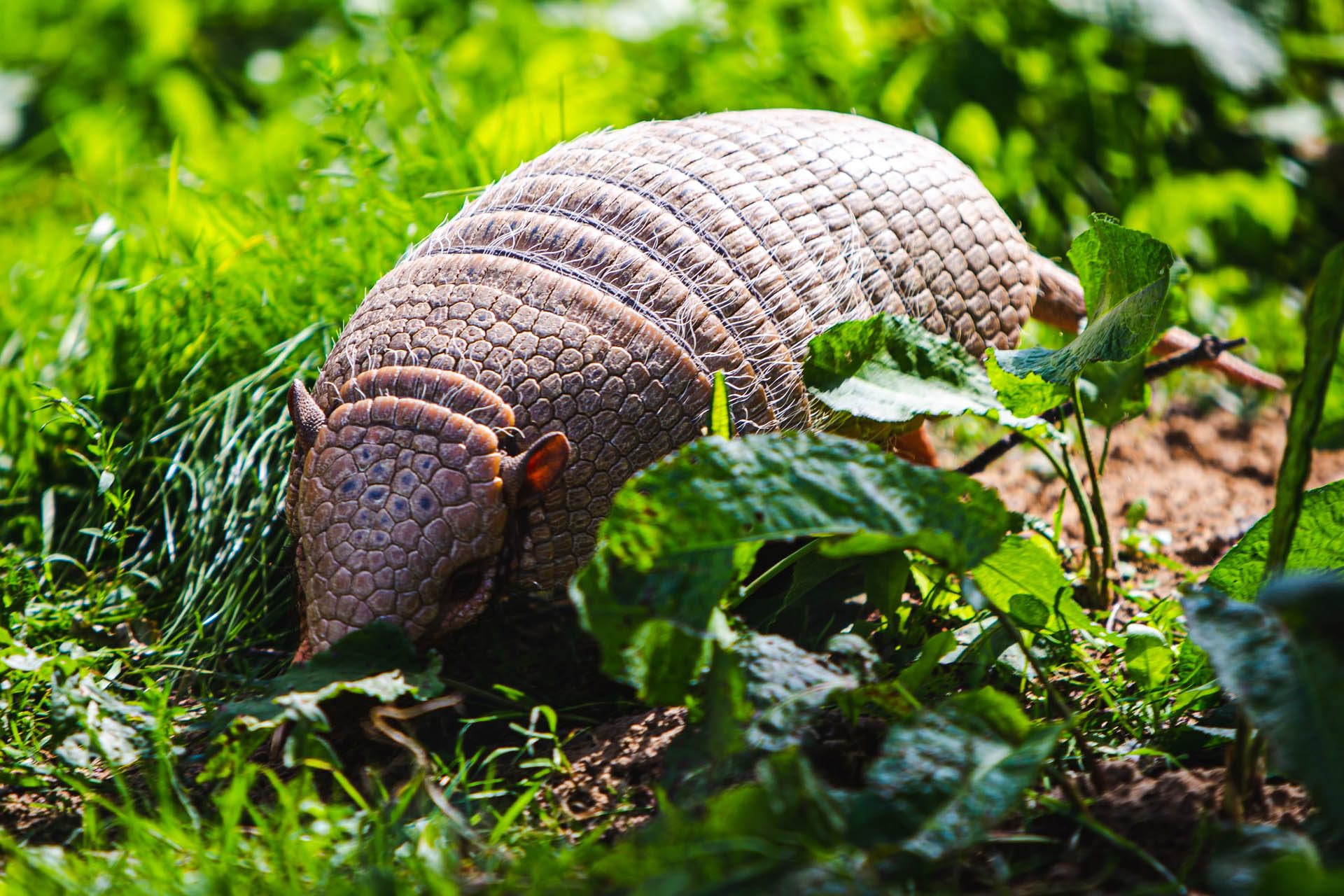 I have armadillo issues! Yes, I know it is absolutely insignificant compared to the violence and social issues that cover our globe, but the scaly night creeper is sand in my shoe.

He visited us more than six weeks ago and must have really felt at home because he continues to make nightly visits. The destructive pest began uprooting a small flowerbed near our back door. It held a generous array of happy daisies that greeted me each morning. The armadillo liked the tilled soil and tilled it more – uprooting most of the daisies looking for his diet of earthworms and grubs. (Even his diet is gross!)

When I made that first groaning discovery, I knew immediately who was to blame. I had experienced similar visits in Etta. Google gave me lots of suggestions on how to rid the gray-digger, but a trap seemed the best option.

Now, what kind of bait? Google suggested some earthworms tied up in a piece of panty hose. Armadillos can’t see well, but they have a strong sense of smell. The earthworms died an untimely death in a prison of mesh for nothing. The digger moved to my iris bed and uprooted almost every plant that I had hauled from Etta.

Othel saw my frustration and purchased a hunter’s wild game movement-detector camera and anchored it low, near my beds. If we could determine the time of the monster’s visit, we could be waiting and wake all the neighbors with Othel’s shotgun blast. It was a price I was willing to pay.

The camera saw it all. He waddled in and began his night feeding around the cage trap at 3:00 a.m. A neighbor suggested sweet potatoes for bait since it was an underground food. The camera revealed the armadillo’s avoidance of every potato leading to the trap.

My brother suggested marshmallows. Nothing was ignored in suggestions for armadillo capture. We baited the trap with giant, tasty marshmallows. The next morning the marshmallows were gone but no capture. The camera showed a raccoon sitting on our porch smiling at the camera as he dined on marshmallows.

By the weekend, the drought and armadillo had ravaged my small flower beds. There would be no pansy or mum plantings for the monster to uproot and destroy.

A neighbor’s dog gave us renewed hope Sunday. On a late walk, Reece had discovered a large burrow a few houses from us. With flashlight and cage, Othel and I set the trap over the opening of the dark hole. I covered the entry with pine straw, and we hoped once more for success.

In the predawn of Monday morning, Othel shouted, “We got him!” I rejoiced exceedingly when Othel delivered him to the deep woods miles from home. When I walked out our back door, new hope welled up inside me. Then I spotted that small bed – another daisy was upside down. The armadillo had a brother!

Surely the Lord was trying to teach me something. Patience? Endurance? No . . . sin is like that ugly armadillo – it destroys and rears its head in choice places with no respect for its subjects. It creeps in stealthily with gross appetites and under the cover of darkness seeking only to steal, kill and destroy – as it multiplies.

The question my Lord asks me: “Why don’t you hate sin as much as that gray, shelled creature and why don’t you seek sin’s destruction with the same passion?”

“To fear the LORD is to hate evil; I hate pride and arrogance, evil behavior and perverse speech.” Proverbs 8:13

Father, My passions are not always directed with the correct perspective. I rant and rave over the transitory and wink at the eternal. It’s not the sand in my shoe that’s the real issue; it’s my misdirected passion. Help me, LORD. Amen