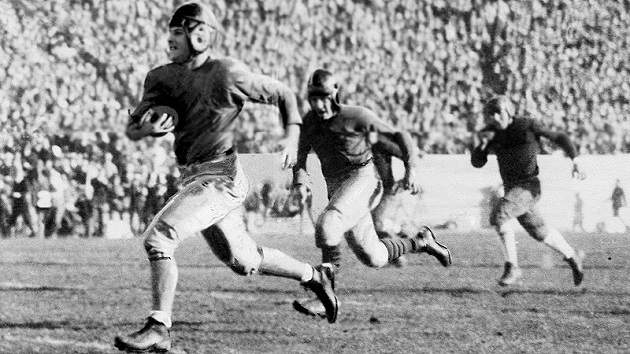 transcribed from a Sunday School lesson from Chris Maddux in the Connections Class.

Well, on January 1, 1929, Georgia Tech and the University of California-Berkeley squared off in the Rose Bowl in Pasadena, California, playing for the National Championship. In the middle of the second quarter, Georgia Tech had the ball. They pitched to a running back by the name of Jack “Stumpy” Thomason. He went out to the right. They had the ball on their own 30-yard line and Jack “Stumpy” Thomason fumbles. The ball was recovered by Roy Riegels, who was the center for the California Golden Bears. He played center on both offense and defense. (The center position then was more like the nose guard is today.) He was soaking wet at 165 pounds playing center. He was an All-American and their team captain. He picks up the fumble and he was about to begin running the thirty yards to score a touchdown when he got hit. He got turned around and lost his bearing and began running the wrong way 70 yards back towards his own end zone.

At that point in time, “Wrong Way” Roy Riegels is going as fast as he can to the wrong end zone. The quarterback of the California Golden Bears, Bennie Lom, known for his speed, chases down his teammate who was going the wrong way and tackles him on their own three yard line. The mob of Georgia Tech players moved them back even to their own one yard line.

Roy picked up the ball and went the wrong way. His teammate had to tackle him to stop him from scoring a touchdown for the other team. At that point in time, California Coach Nibs Price, decides that it would be better to punt than it would be to try to run a play from their own end zone. At that time, Bennie Lom drops back to punt and Georgia Tech comes in. They block the punt, resulting in a safety for Georgia Tech. They go into the locker room at halftime – the score is now two to nothing, Georgia Tech over California. At that point in time, Roy Riegels looks up at this coach, Nibs Price, and he says “Coach, I cannot go back out there. I’ve ruined it for you. I’ve ruined it for myself. I’ve ruined it for the entire University of California. I simply cannot go out there and face that crowd.” At that point Coach Nibs Price looked at him and said, “Roy, you have to go back out there. The game in only half over.”

So they went back out. I’d like to tell you that Roy did something spectacular and California won, but they did not. Georgia Tech won the game eight to eleven, the difference being the safety that was scored because Wrong Way Roy went the wrong way.

In Acts 9 there’s a man by the name of Saul of Tarsus and he is absolutely going the wrong way and he’s doing it, he thinks, for the right reasons, and he has no idea that what he is doing is not what God has called him to do or wants him to do. He doesn’t know; he does not care. He is zealous in going down that wrong way. All of a sudden the Lord Jesus comes and just like Benny Lom went and tackled Wrong Way Roy in January of 1929. Jesus comes in out of the sky and a bright light with a voice from heaven and he stops Saul from going the wrong way so that Saul could fulfil the divine mission that God had prepared for him since before he was even born.

Learn more about Chris Maddux and The Connections Class and other small groups at FirstBaptistJackson.org