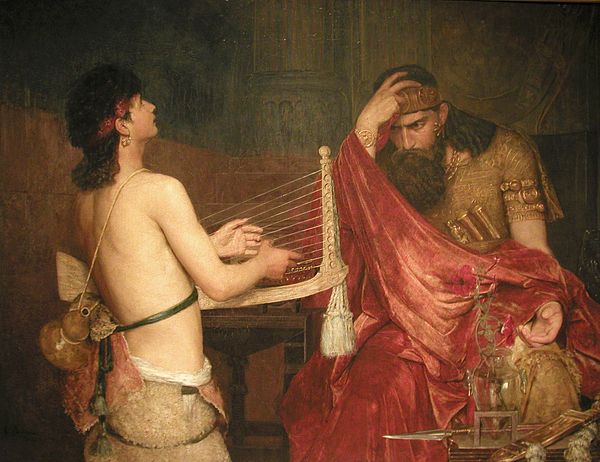 Stop, Pause, and Think It Through

Every person has done something in their life that they regret. They’ve ignored the inner-voice that tells them to pause and think for a minute before they take action. It’s human nature and the complete opposite of self-control. As Christians, we desire to discern God’s will, but we’re not always patient during the process. This is not a new challenge, and prevailing over the temptation to rely on self and have faith that God’s will is always better than our own is best described in the story of David and Saul.

The story of these two men was troubled from the start. From the slaying of Goliath (introducing possibly one of the first praise songs in history – “Saul has slain his thousands and David his tens of thousands”) to his popularity and friendship with Jonathon (Saul’s son), jealously became the evil drug of choice that would cause the king to attempt murder on David.

Wikipedia gives a pretty good account of the story of the ongoing battle between the two rivals.

On two occasions, Saul threw a spear at David as he played the harp for Saul. David becomes increasingly successful and Saul becomes increasingly resentful. Now Saul actively plots against David. Saul offered his other daughter, Michal in marriage to David. David initially rejects this offer also, claiming he is too poor. Saul offers to accept a bride price of 100 Philistine foreskins, intending that David die in the attempt. Instead, David obtains 200 foreskins and is consequently married to Michal. Jonathan arranges a short-lived reconciliation between Saul and David and for a while David served Saul “as in times past” (1 Samuel 19:1-7) until “the distressing spirit from the Lord” re-appeared. Saul sends assassins in the night, but Michal helps him escape, tricking them by placing a household idol in his bed. David flees to Jonathan, who arranges a meeting with his father. While dining with Saul, Jonathan explains David’s absence, saying he has been called away to his brothers. But Saul sees through the ruse and reprimands Jonathan for protecting David, warning him that his love of David will cost him the kingdom, furiously throwing a spear at him. The next day, Jonathan meets with David and tells him Saul’s intent. The two friends say their goodbyes, and David flees into the countryside. Saul later marries Michal to another man.

It’s a lot of drama, but it’s important to our history. It’s also important and relevant today. David had the chance to murder Saul and to take control of his own destiny, but instead he paused and relied on faith that he could not see. Did David really want to be written in history as gaining the thrown because he murdered God’s annointed king? David did become king and one of the greatest servants and leaders recorded in history.

How do you want your history to be recorded? Stop, pause, and think it through, and know that God’s sovereign will is better than anything you’ll ever do on your own.