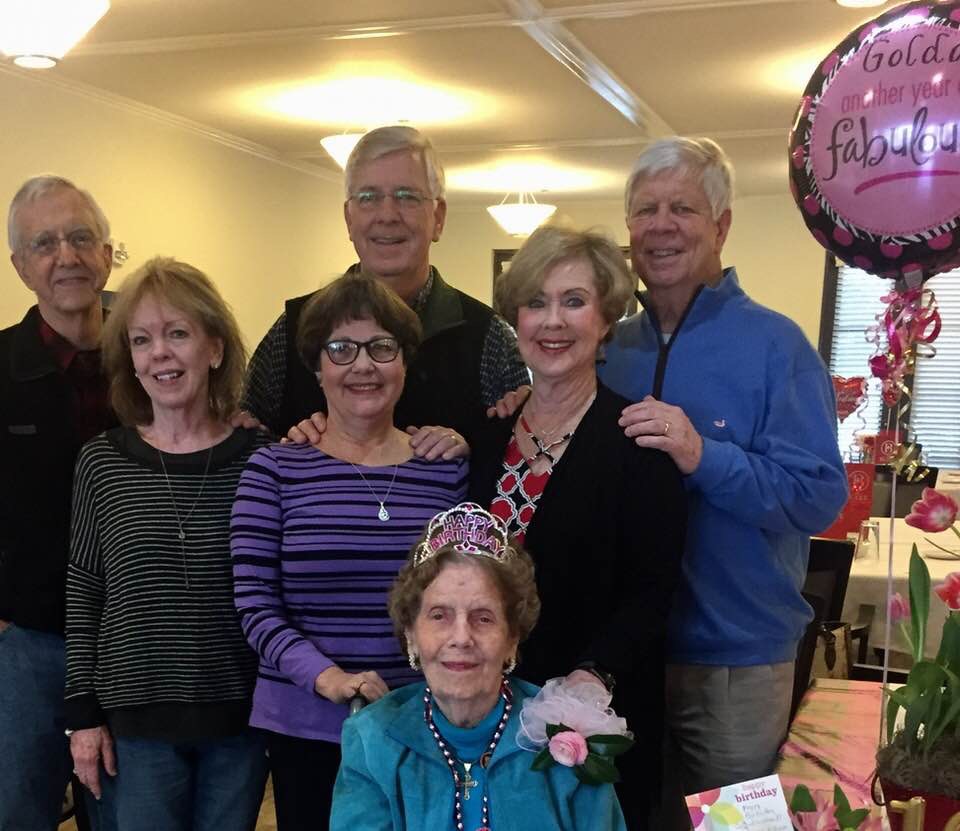 Today, as I was walking through downtown Jackson on my way to the local sushi restaurant on Capital Street, I remembered a story that a man told me earlier this week. This very street that I was walking on was the meeting place and the setting many years ago for the first date of a couple that many people in the Jackson area know and respect well. In 1937, a beautiful young girl with the beautiful name of Golda had her first date with a young many named Crawley Stubblefield. As I was walking I was trying to visual the Walgreens that served them that cup of coffee that started a relationship that eventually ended in a long marriage with four children. Was it near the sushi restaurant? Maybe it was one of the bank buildings. It doesn’t matter because that relationship turned into a beautiful love story that spawned three more generations of a family that would become world-changers right here in Jackson. This was a family that would have a lasting effect on the church that I love so much, First Baptist Jackson. Thank the Good Lord for Walgreens.

In 1939, Golda and Crawley Stubblefield got married at First Baptist Jackson and it’s here that their long ministry together began. Many years later their great-grandchildren are a part of the children’s ministry and their three living sons tell the story of how their mother, Golda, who just turned 103 years old, has a faith that wouldn’t be understood by anyone who didn’t love the Lord as much as she does.

I met Miss Golda through her granddaughters who are near my age, but I noticed and admired her many years before that. Miss Golda’s third child was born with a disability and it was hard to not notice the love and care that she gave her third-born child who was named Steve.

“Steve was a funny guy because he just said whatever came to his mind,” says Dr. Crawley Stubblefield, one of Miss Golda’s sons. “He was born with Microcephaly, a condition where the head is smaller than expected. She loved that child so much and cared for him his entire life.” Steve was actually only the second Seedster at Mustard Seed, which is a partner ministry of First Baptist Jackson. “He made everybody he came in contact feel better. He was a blessing to us and to her,” continues Crawley. Steve rarely missed a Sunday morning worship service, which is what I noticed, and the dedication of the Stubblefield family to the Special Ministries at our church had a profound impact on me many years later when I found myself the parent of a child with Down syndrome. This family paved the way and set an example for many new parents like me who needed to see the acceptance and inclusion of people with special needs. They were the example that children with special needs are gifts from God. It’s families like that that make a profound difference in people’s lives.

The contribution to Special Ministries was only the beginning of what this family would do in our lives at First Baptist Jackson. Miss Golda was married to Crawley, Sr. for thirty-eight years before he died. Crawley had a life-long career with the Internal Revenue Service and traveled abroad with that job. Over the years he had rejected leadership roles at First Baptist Jackson because of his career, but after retirement he finally accepted one of the most important roles in our church, Chairman of the Deacons. Four months before his term began, Crawley died in his sleep, devastating a congregation who adored not only Crawley, but his lovely wife, Golda.

“Mom suddenly became the sole caregiver for Steve and it’s then that people start noticing that there was something special about her. She taught a Sunday School class until she was 90 years old and at one time she had more than 70 members in that class. She made a point of being a part of their lives. She sent a birthday card to every member on their birthday. When Steve died people were concerned that she wasn’t grieving enough, but people like us who know her know that she lives by faith and she believes deeply in what she teaches every week in Sunday School. She had prayed her entire life that she would outlive Steve and that he would never have to know a life without her and God answered her prayer. She was grateful. She also handled my father’s death with grace because she knew she’d see him again. She is a living testimony of faith. My father often bragged that my mother was the best thing that ever happened to him and she was a living example to my family and to my brother’s families,” says Crawley.

Without fail for the last forty-one years, Crawley has eaten lunch with Miss Golda every Thursday. She loves a good Wendy’s hamburger and he tries to never disappoint her on that front.

Crawley Sr. and Miss Golda traveled on short-term mission trips and spent a life serving together and she recounts that the last ten years of their lives together (after he retired), with their son, Steve, were the best years of their life. “That’s another answered prayer,” says Crawley, “she prayed for a happy life together after his retirement.”

Miss Golda recently celebrated her 103rd birthday with her three sons and their families. The Stubblefields will always be known as a family who has made a difference in our church and in our community, and we celebrate the long life and service of Miss Golda as we remember our past and move forward together in the ARISE campaign.